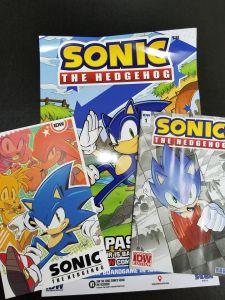 WonderCon 2018 in Anaheim is now well underway and will continue through the weekend. IDW will have a strong presence in their home state with multiple signings and panels culminating in a Sonic Town Hall.  This evening from 5:00-7:00 PM PST, writer Ian Flynn will be appearing for his first signing session of the con. Likewise, with the opening of the convention doors, the first issue is officially on sale in the form of a variant by Tracy Yardley. With the first images of the cover emerging, we can now confirm that it is indeed a black and white version of the B Cover with an “IDW Convention Edition” stamp in the bottom left corner! Copies are already beginning to pop up for sale on the internet, so if you were not able to get to Anaheim this weekend, act fast! Additionally, Tyson Hesse‘s art print, and poster featuring Kieran Gates‘ art are also available at the convention.

With the start of the WonderCon, we would also like to announce the start of the official Sonic Source Twitter! As news evolves and changes, we will have the newest information and other tidbits not substantial enough yet for an entire blog post there. Follow us now to hear the latest IDW Sonic news from WonderCon and beyond!

First images of the variant are popping up online! It is indeed a b&w version of Yardley’s B cover! They are also giving away the art print and poster we’ve seen before!#WonderCon #Sonic #IDWSonic #IDW #Comics #TracyYardley! #SonicComics #SonicSource pic.twitter.com/39PXlJBYVE