The origin of the being known as Infinite is revealed. Who can withstand the temptation of the Phantom Ruby?! 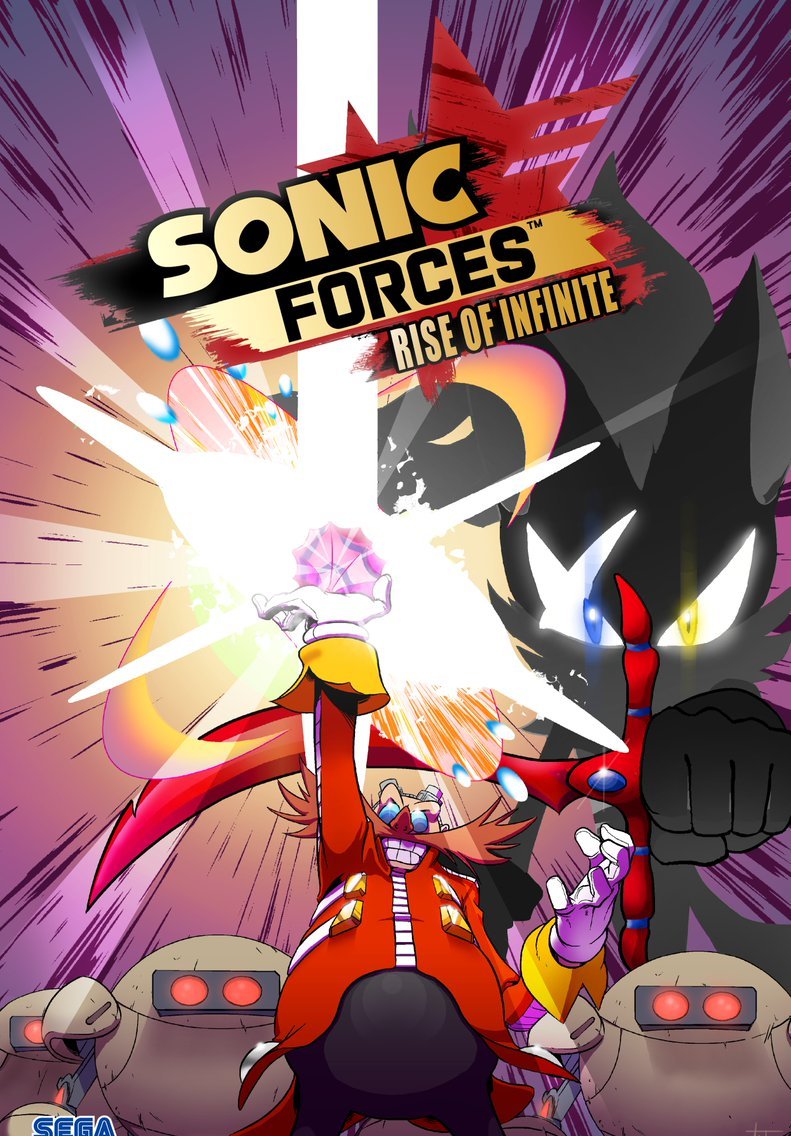 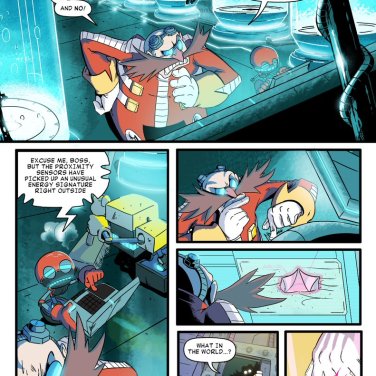 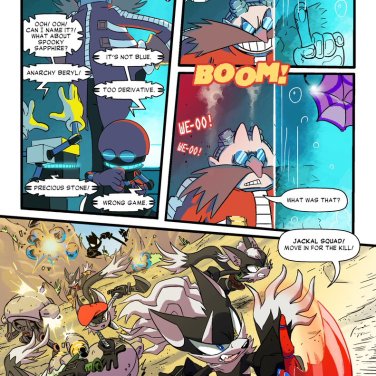 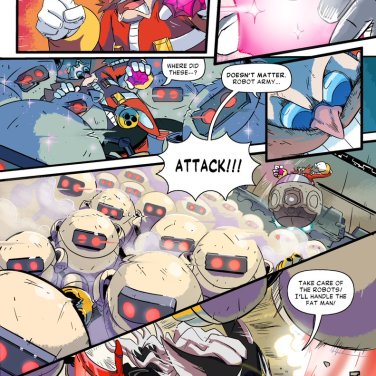 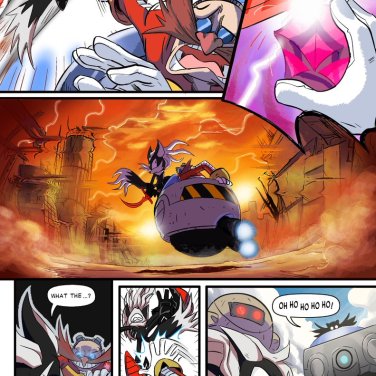 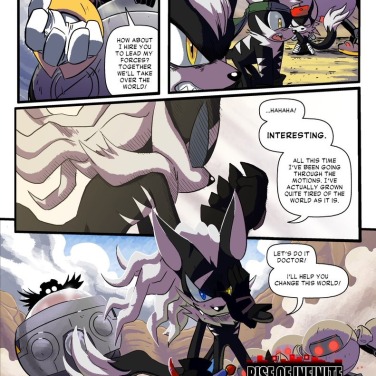 Within his desert base, Dr. Eggman struggles to come up with new ideas for robots when Orbot suddenly alerts him to a proximity sensor that has been tripped outside the facility. Going outside to investigate, Eggman finds a strange jewel pulsing with bizarre power. Upon picking it up, he is immediately struck with a vision of a thriving Eggmanland displaying the  full glory of his future empire. Shocked, he drops the jewel before frantically snatching it up again and begging for the vision to return. Coming to his senses, he arrives at the conclusion that the jewel is able to cause hallucinations and determines to begin researching it in order to unlock its potential uses.

After testing the jewel, Eggman’s results seem inconclusive regarding its enigmatic and seemingly contradictory energy readings. Cubot and Orbot argue over what to potentially name the strange jewel, but Eggman declares it the Phantom Ruby.  Just then, his base comes under attack from the Jackal Sqaud, lead by a jackal with a unique red scimitar, two different colored eyes, and a scar across the right one. Enraged, Eggman regrets wasting time studying the ruby he is holding instead of bolstering his army.  No sooner than spoken, a dozen egg pawns appear out of thin air crowding the doctor. Momentarily confused by their sudden appearance, he dismisses the strange phenomenon and dispatched them to repel the attackers.

Joining the fray himself, Eggman is targeted by the Jackal Squad’s leader. Just as he is about to be struck down by his foe’s blade, Eggman holds out the ruby, blocking the jackal’s scimitar. The two share a vision of a city in ruin. The jackal falls to the ground in confusion as the vision fades. Intrigued, Eggman reaches out his hand in a gesture of peace and makes him an offer to join forces and take over the world together. Swayed by his vision, the jackal accepts Eggman’s offer, stating he is tired of going through the motions and is ready to change the world.

The Rise of Infinite gives perhaps the most interesting glimpse into the world of Sonic Forces in the mini-series. While the others lead directly into the events of the game, this one goes back a bit further to see how Eggman  and the jackal that would become Infinite met. Again, because of space limitations, Flynn takes a few liberties to move the plot along, like the Phantom Ruby conveniently appearing right outside his door or the immediate willingness of the jackal to accept Eggman’s offer. However, without giving too much away, there are some events in Sonic Mania that may explain how to the ruby could of ended up at Eggman’s doorstep since it too deals with Classic Eggman sending his squad of Hard-boiled Heavies to retrieve it. There too, it is seen to have significant effects on time and space, so it is feasible that somehow it could have arrived at that location after travelling through time and space from a different dimension. Regardless, we will probably never know how it got there for sure!

Otherwise, I found this issue to be quite intriguing, both giving insight into how Infinite and Eggman crossed paths, but also subtly giving reason for why Eggman’s newest weapon is a enhanced but living creature rather than a robot. Despite the lack of context, I would love to see more background information regarding the jackal squad and their mysterious leader before he became Infinite. Perhaps IDW will be able to expand on his character in the ongoing series!

In this issue, Adam Bryce Thomas  fills in the comparative lack of dialogue with some broader landscape scenes. We see several visions portrayed by the ruby including a vibrant and golden Eggmanland as it could be, juxtapose to a city in absolute ruin. One might even question why Eggman would be so eager to recruit Infinite when comparing the two visions. Likewise, we see two more contrasting panels. One of the Jackal Squad charging through the desert opposed by a fresh batch of egg pawns marching out in defense. We also get our first look at what Infinite looked like before he donned the mask we see him wearing in the game. It is unclear if his scarred right eye is blinded thus explaining why it is covered later by the mask, or if he displays heterochromia, but judging by the way it is shown to glow, I would assume the latter. I loved the choice to show Eggman reaching out from shadow, his Cheshire cat-like grin glowering from the darkness as his hand extends to offer a devil’s deal.

While I cannot say this issue is flush with character development, it does give some tantalizing background to Infinite’s origins. We see Eggman first becoming obsessed with the the powers of the Phantom Ruby and begin learning of its true potential before his actions in Stress Test and Looming Shadow. When it comes to Infinite, perhaps more questions are raised than are answered. Who were the Jackal Squad? Is there significance to Infinite’s heterochromia? What is up with his red scimitar? And perhaps the most burning question in my opinion, what  were his motivations and goals before crossing paths with Eggman and the Phantom Ruby? I feel the answer to this would have potentially allowed me to believe his immediate acceptance of Eggman’s offer more readily.

I think Rise of Infinite suffered from some of the same issues that Stress Test did to a lesser extent. It took a couple short cuts for the sake of space, but considering the  nature of the content introducing a new original character in an interesting manner redeems it in my opinion. In that regard, I rate it at a 6/10. The issue also builds into the mystery of the Phantom Ruby that the previous two issues began to develop and as whole gives the reader a good idea of what it is and of what it is capable as we see it entice two powerful characters with its promises of power.

Thus concludes my reviews of the Sonic Forces mini-series! With the start of IDW’s ongoing series just over a month and a half away, I am sure there will be no shortage of news as they ramp up to launch. So stay tuned and check back regularly for all the latest information and in the meantime be sure to go back and check out some of my previous posts to make sure you are up to date!